This post is based on an undergraduate project which was done together with my colleagues:

Mathematics is an active discipline! Whenever you see a question written in this style, I encourage that you attempt to solve it! Clicking the question will reveal the answer.

When someone tries to square the circle, it means that they are trying to accomplish a seemingly impossible feat. But what is this circle squaring all about, and is it really that difficult? In this blog post we’re going to explore this beautiful math problem that stumbled the ancient greeks, and we will show how the concept of field extensions provides a beautiful answer.

We start with a given circle of area \(A\), and the goal is to obtain a square with the same area \(A\).

Ancient greeks wondered if one could obtain the desired square by only using ruler and compass. This means that, from a given set of points (in this case, the center of the circle and a point on the circle itself, so that their distance is the radius), we can only construct some of the remaining points in the plane (hopefully, the desired square vertices). So, what exactly are we allowed to do? Let’s suppose we start with just these two points in the plane: 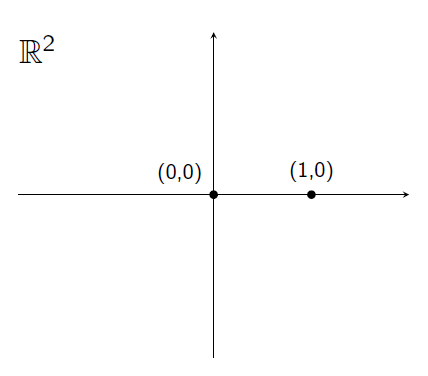 One of the two points has been assigned the role of the origin point, and identified with \((0,0)\), and the other one serves as a way of defining a unit length, which is the distance between the two points. We then are allowed to perform the following operations:

With these two operations, any intersection point of straight lines and/or circumferences we can trace becomes part of our working point collection. If we start with the two aforementioned points, what other points can we reach? Can we get the vertices of the desired square? We’ll dive into the answer step by step.

The first points that we can secure are those on the \(X\) axis that have an integer coordinate. That is, points of the form \((n,0)\) where \(n \in \mathbb{Z}\). All we need to do is trace the \(X\) axis by using our ruler with the starting points, and then, construct a circumference of unit radius centered at \((1,0)\). This circumference will produce \((2,0)\), and we can keep iterating this process to get every point: 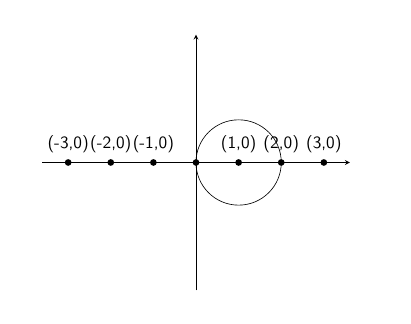 As such, we obtain any integer distance \(z \in \mathbb{Z}\), between points \((0,0)\) and \((z,0)\). However, we still face two major problems: for the desired square, we’d want a non-integer distance to appear (remember, the side length needs to be \(l = \sqrt{\pi}r\)), and we’ve yet to obtain a point that’s not snapped to the X-axis. This second problem is actually easy to solve: 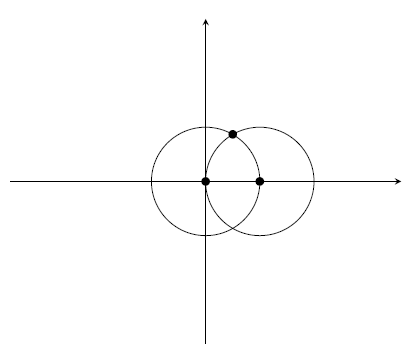 Notice that the three marked points in the previous figure form an equilateral triangle. Can you figure out the coordinates of our new point? What is its distance to the origin?

Our quest to reach the largest possible amount of points has to take a quick detour to gather the necessary tools that will allow the search to continue. We’re going to see how to obtain parallel and perpendicular lines. Firstly, given two points \(Q_1\) and \(Q_2\) that form a line \(l\), and a third point \(P\), we want the parallel to \(l\) through \(P\), that is, a second point \(P'\) such that the line connecting \(P\) and \(P'\) is parallel to \(l\). We start by tracing a circumference of radius \(\overline{Q_1Q_2}\) centered at \(P\): 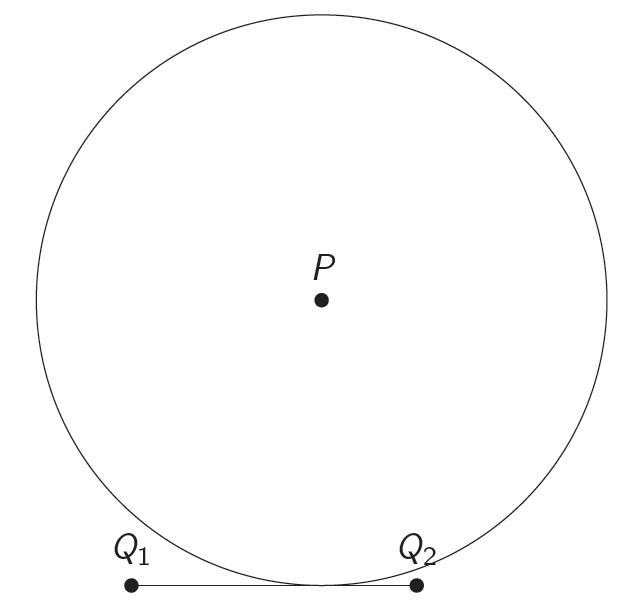 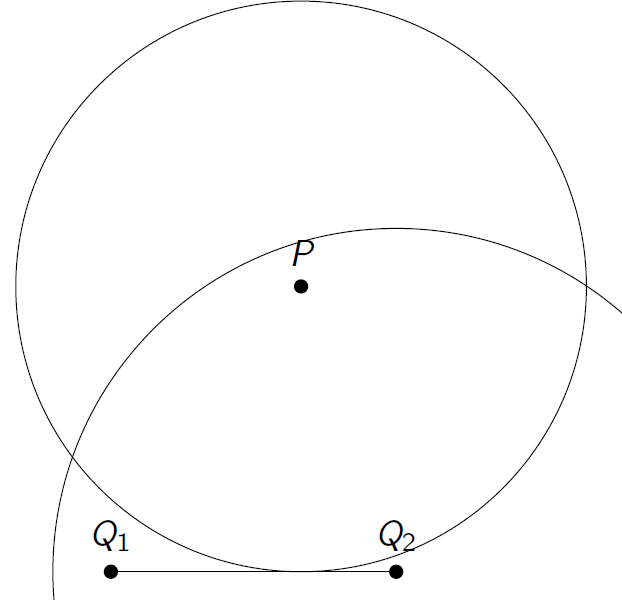 They intersect at \(P'\) with the desired properties! 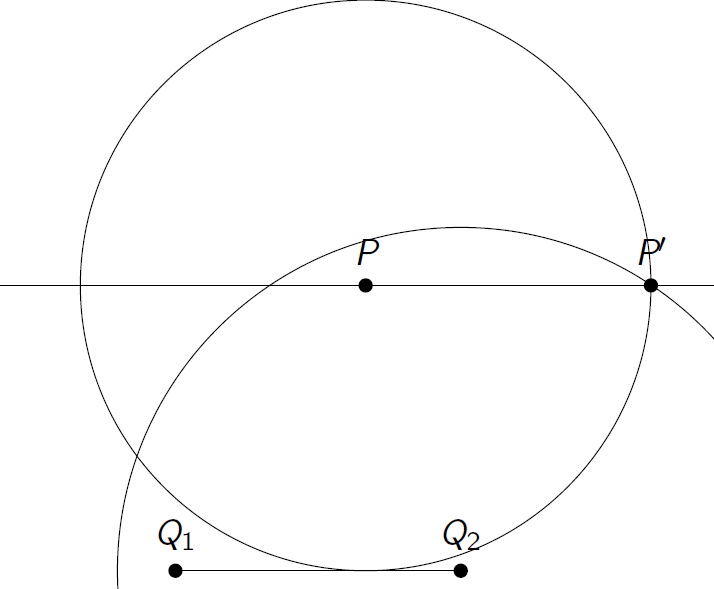 Visually, it is clear that the new line is parallel to the previous one. Will this always be true? 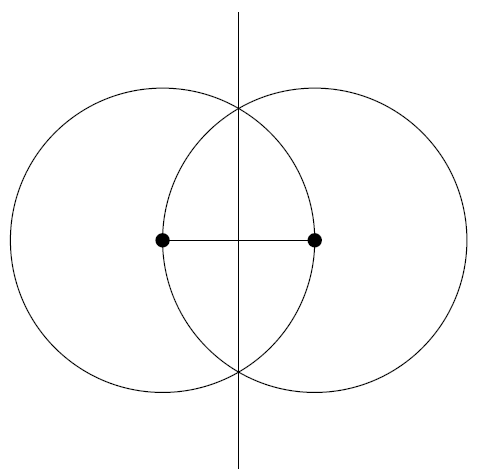 If \(P\) doesn’t lie on the perpendicular bisector, then just use the previously explained parallel procedure to shift it!

The field of constructible numbers

So far, we’ve been talking about constructible points, which were those that could be obtained from the origin and the unit point. However, thanks to the results derived in the previous section, it doesn’t really matter if we consider points or numbers. For example if you can reach point \(P = (x,y)\), then you can obtain \(x\) itself (that is, the point \((x,0)\)) by tracing a parallel to the \(Y\) axis through \(P\) and letting it intersect the \(X\) axis. 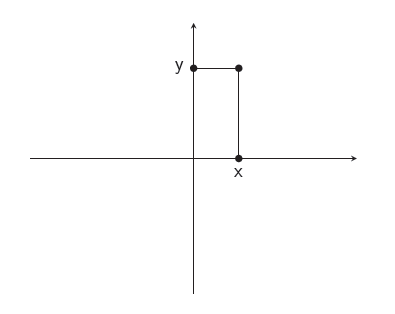 But wait! So far we had just constructed points in the \(X\) axis. It would be illegal to use the \(Y\) axis like we just did, since we didn’t get any point from said axis in the first place. Can you explain a way of constructing such a point, so that we can use it?

Since we already have the horizontal axis, and we know taking perpendiculars can be done, simply trace a perpendicular to the \(X\) axis through the origin. There are, of course, many other valid explanations.

This means that we can make our life easier by establishing the following definition: a number is constructible if and only if it’s any component of a constructible point (starting from \((0,0)\) and \((1,0)\)). We’ll denote this set of numbers as \(\mathcal C\). Constructible numbers and points are essentially the same, but it will be easier to work in one dimension. Note that \(\mathcal C \subset \mathbb R\), although we don’t know yet whether they are the same.

In order to use the powerful tools of algebra with our problem, we’re going to show some key properties of \(\mathcal C\). This set, along with the usual sum (\(+\)) and product (\(\cdot\)) operations, has a field structure. This means that certain operations are preserved. Let’s take a look at them with visual proofs.

Firstly, there are neutral elements for both operations, that is, elements such that, when summed or multiplied with another number, leave said number unmodified. They are, of course \(0\) (for the sum) and \(1\) (for the product), and them being constructible is the very first thing we established. 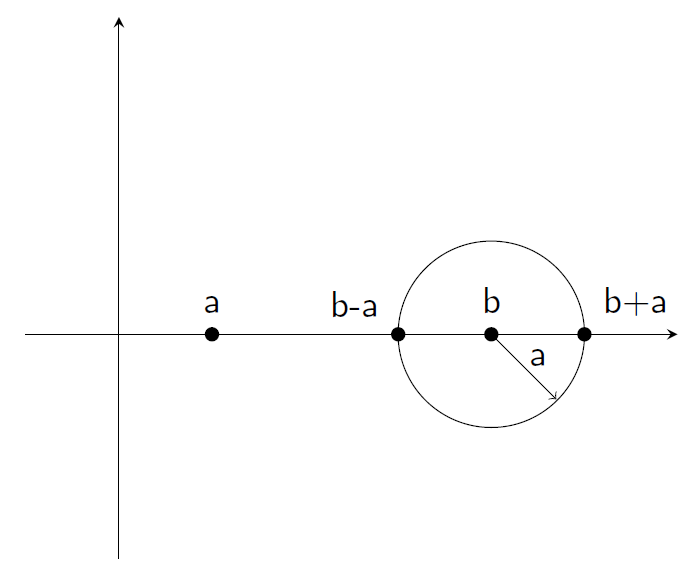 Same goes for the product. Here we show the construction, which cleverly uses Thales’s Theorem: 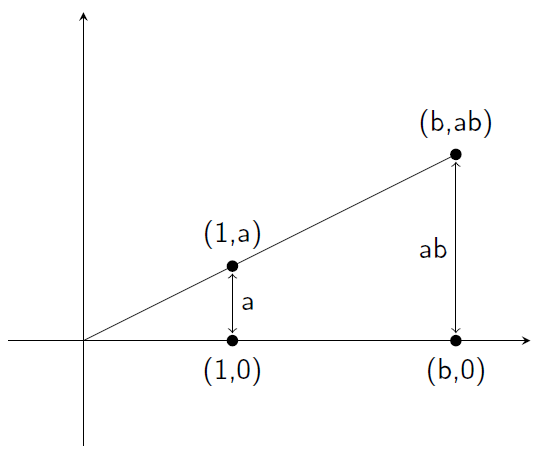 This same construction with a minor modification yields the multiplicative inverse: 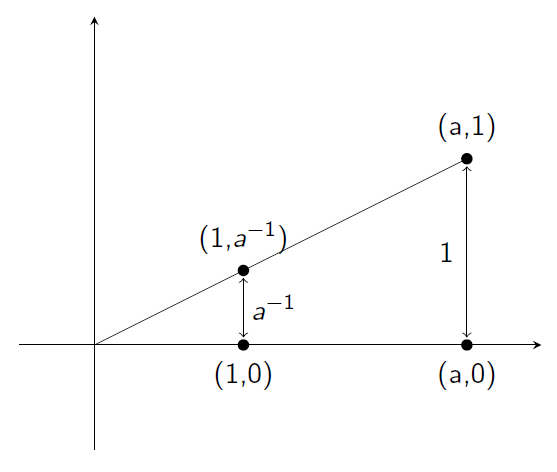 With all these properties, as well as associativity and distributivity, which are automatically inherited from operations in \(\mathbb R\), we can conclude that \(\mathcal C\) is a field, as desired.

If you pay close attention to the last two figures, you’ll see that in order to apply Thales’s Theorem, we need the involved numbers to be positive (\(a,b > 0\)). Can you explain why multiplication and inverse work in general, even if the values are not both positive? You should be able to do this without any crazy construction, only with everything discussed so far.

In previous sections we saw that every integer could be constructed, that is, \(\mathbb Z \subset \mathcal C\). It turns out that the smallest field that contains the integers is the rationals (can you see why with the properties discussed?), which automatically gives \(\mathbb Q \subset \mathcal C\). In other words, any point of rational coordinates can be constructed. That’s a lot!

Let’s wrap up this section with one last crucial property of \(\mathcal C\). Given the compass rule, it makes sense that if a point \((a,b)\) can be constructed, then so can its distance to the origin (the number \(\sqrt{a^2+b^2}\)). The way to do this is the obvious one (with a circumference centered at \((0,0)\) and intersecting the \(X\) axis). This allows non-rational numbers to be constructible: for example, \(\sqrt{2}\) is the distance of \((1,1)\) to the origin. It turns out that the square root of any positive, constructible number is also constructible, and the classical construction for this is the following: 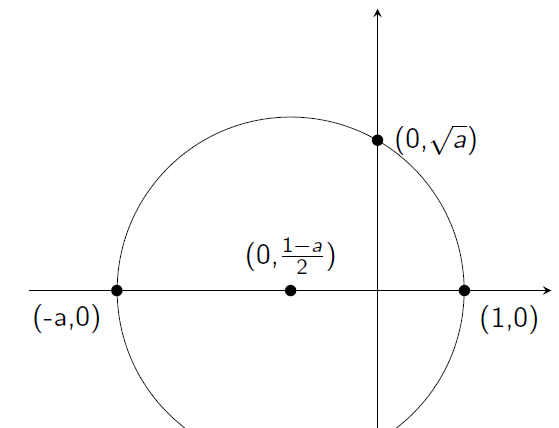 Equipped with the knowledge that \(\mathcal C\) is a field where taking the square root is preserved, we are ready to prove that squaring the circle is impossible!

The key observation to prove the impossiblity of squaring the circle lies on algebraic field extensions. Suppose that, starting from \(\mathbb Q\), we have already constructed some of the constructible numbers \(\mathcal B \subset \mathcal C\). We can assume \(\mathcal B\) to be a field.

Third case. As you might have already guessed, the third case involves intersecting two circles:

with \(a,b,c,d,e,f \in \mathcal B\). One can subtract the two equations to obtain a new equation

which is that of a line, and intersecting this line with any of the two circles gives the point \(P\), so we’re back to case \(2\).

The key thing we’ve checked is that if the new element wasn’t already in \(\mathcal B\), then it satisfies a degree \(2\) polynomial with coefficients in \(\mathcal B\). In mathematical terms, this means that the new element is algebraic over the field \(\mathcal B\). If we denote by \(\mathcal B (x_0,y_0)\) the new field that arises upon adding the new points (and building a field as explained before, by adding, subtracting, multiplying and inverting the elements), this means that \(\mathcal B (x_0,y_0)\) is an algebraic extension of the field \(\mathcal B\) (because it was obtained by adding algebraic elements). A result from field theory establishes that every element of an algebraic field extension is algebraic (not only the ones we manually added), but we won’t need this for our argument.

The proof needs a decent amount of theory that doesn’t fit here.

Theorem 3. It is impossible to square the circle. That is, starting from a circle which can be assumed centered at \((0,0)\) and of unit radius, it is impossible to obtain, using ruler and compass, (the vertices of) a square with the same area \((A = \pi)\).

The fact that \(\pi\) is transcendental is not easy to show, and can be deduced from a theorem due to Lindemann and Weierstrass.

Congratulations for making it here! This was quite a dense post, but I hope you could learn something along the way! There are other marvelous results that can be proven using all this theory, which closely relates to Galois Theory. Here I leave you some more questions that will allow you to further explore this topic if you want to.

Is it possible that \(c \in \mathcal C\) satisfies a polynomial with a different degree from the one obtained in the previous question?

Theorem 4. If we restrict every polynomial discussed so far to be irreducible, then the answer to the previous question is no. In other words, if \(c \in \mathcal C\) is constructible, and \(P(X)\) is an irreducible polynomial with coefficients in \(\mathbb Q\) so that \(P(c) = 0\), its degree is necessarily the one obtained in the first question of this section.

(Hard question) Use these facts to show that it is impossible to duplicate a cube with ruler and compass. That is, given a cube with two of its adjacent vertices at \((0,0)\) and \((1,0)\), it is impossible to construct (the vertices of) a cube with double the volume (that is, volume \(V = 2\)). Use the results from this section, as well as the proof for the circle squaring impossibility.

If you got it, congrats! Contact me if you want to discuss this question.

If you got it, congrats! Contact me if you want to discuss this question.

Back to the main page.